The Convention of Mediation

On 07 August 2019 the United Nations Convention on International Settlement Agreements Resulting from Mediation was signed by the members of 46 countries at an official signing ceremony in Singapore including, Turkey, Qatar, the United states, China [1].  A full list of signatories is at the end of this post.

The Convention to be known as “Singapore Mediation Convention” aims to address the lack of a framework to facilitate the enforcement of international settlement agreements resulting from mediation. The Convention offers easier and more efficient enforcement of commercial settlements reached through mediation and will likely provide a regulatory foundation to support rise of mediation in resolving international commercial dispute alongside arbitration. It is the “New York Convention” of the mediation world as such. The Singapore Convention requires implementation in domestic legislation like the New York Convention.

Broadly, mediation is a means of alternative dispute resolution whereby an independent person (mediator) assists the parties to negotiate and resolve the dispute cost effectively and promptly. As such it is relatively informal, confidential and consensual i.e. resolution based on party interests rather than legal rights. In respect of domestic disputes the concept of mediation is not new. However the international use of mediation has not been significant.

In 2014 a survey was conducted to assess the extent to which a mediation enforcement convention is desired.  The results show that almost 93 % of the respondents were likely to mediate a dispute with a party from another country if they knew that country ratified an UN Convention on the enforcement of mediated settlements[2].

The Singapore Convention avoids any specific definition of mediation. It simply requires that an amicable settlement of a dispute was attempted with the assistance of a third party who has no authority to impose an outcome on the parties to the dispute.

Enforcement is rather straightforward in terms of domestic disputes when the parties to the dispute and the enforcement process are in the same jurisdiction[3]. However for international disputes the process is more complex.  This is where the Singapore Convention comes into play.

Enforcement Under the Convention

There are a number of conditions for enforcement under the Convention namely;

The Convention applies only to commercial disputes but not to family, inheritance, employment, or consumer related disputes. Construction disputes to that extent is covered by the Convention.  We will elloborate further in a subsequent article as to what the Convention means for the Turkish construction industry which is the second largest in the world after China[4] .

It is expected that the Convention will come into force sometime within the spring of 2020.

What it means for the International Construction Industry?

Disputes arise in international construction industry are generally complex and expensive to resolve.

Sophisticated methods of alternative dispute resolution have been around and used by the industry for over decades.  The FIDIC 1999 Rainbow Suite for example requires binding adjudication. Much has been written by the scholars of dispute resolution world as to advantages and disadvantages of the ADRs over litigation and arbitration.  We will not go into detail in this article as such, however it is generally accepted that the ADRs are cost and time efficient.  International dispute resolution expert Metehan Sonbahar of EQUITAS, a leading specialist consultancy providing high quality expert advisory, consulting and dispute management services to the global engineering and construction industry, said: “mediation does not only provide significant time and money efficiency when compared with litigation and arbitration, but can also help prevent disputes leading to the termination of commercial relationships.”

Notwithstanding that, there are known enforcement issues in cross border transactions.  From the adjudication perspective for example, the general view is that the binding adjudication decision rendered under the conditions of the FIDIC 1999  Rainbow Suite  must be enforceable. That is also supported by the renowned Persero cases. That being said enforcement of an adjudication decision is not a straightforward process and it requires experienced counsel, dispute resolution consultants and judges / arbitrators. There is also a lack of an international framework for the enforcement process.

This is where we believe that the Singapore Convention will differentiate mediation from other alternative dispute resolution methods ,serving as an important tool encouraging cross-border mediation and  providing parties a framework for enforcement.

On 5 December 2017 FIDIC (Fédération Internationale des Ingénieurs-Conseils) released its new suite of contracts at the FIDIC International Contract Users Conference in London. The new versions of the FIDIC Red Book, Yellow Book and Silver Book were issued constituting updates of the former 1999 editions. In the guidance section of the new FIDIC Rainbow suite FIDIC first time set out five Golden Principles, strongly recommending that the Employer, the Contractor and all drafters of the Special Provisions take all due regard of these principles.

The said five Golden Principles are;

GP1: The duties, rights, obligations, roles and responsibilities of all the contract participants must be generally as implied in the General Conditions, and appropriate to the requirements of the project.

GP2: The Particular Conditions must be drafted clearly and unambiguously.

GP3: The Particular Conditions must not change the balance of risk/reward allocation provided for in the General Conditions.

GP4: All time periods specified in the contract for contract participants to perform their obligations must be of reasonable duration.

GP5: Unless there is a conflict with the governing law of the contract, all formal disputes must be referred to a Dispute Avoidance/Adjudication Board (or a Dispute Adjudication Board, if applicable) for a provisionally binding decision as a condition precedent to arbitration.

In June 2019 a further step was taken by FIDIC at the FIDIC Asia Pacific Contract Users’ Conference where the first edition of Golden Principles was launched. The FIDIC Golden Principles (First Edition 2019) is a 14 page guide setting out reasons to the same five Golden Principles and guidance on how to modify the General Conditions in the Particular Conditions to comply with FIDIC standards.

It was also explained in the Golden Principles as to why FIDIC deemed necessary to publish a guidance, as it states “ FIDIC now experiences applications of “FIDIC contracts”, where significant changes to the General Conditions are made by means of replacing, changing or omitting part of the wording of the GCs through the Particular Conditions (PCs). The replacements and changes introduced have lately been found to be substantial and of such extent, that the final contract no longer represents the FIDIC principles, and thus are jeopardising the “FIDIC brand”, and misleading tenderers and the public.”

The FIDIC Contracts consist of two parts; the General Conditions of Contract (“GC”) and the Particular Conditions of Contract (“PC”).  The FIDIC’s Contract concept has always been that the GCs are for use in a wide range of projects in different jurisdictions and the revisions should be addressed in the PCs in reference to the; particular requirements of the specific project, the site and the Employer’s requirements.  It may also be necessary to introduce amendments to comply with the laws that apply to the project or to comply with the governing law of the contract. These may also be formulated within the PCs.    As longs as the modifications are limited to those necessities provided above the Contractor is recognizable as a FIDIC Contract. Otherwise FIDIC suggests that that it would be misleading and inappropriate to refer to a contract using the FIDIC GCs that does not comply with the GPs as a “FIDIC Contract”.

The ICC has published its 2018 dispute resolution statistics. Out of 842 new arbitration cases registered in 2018 224 involved disputes from the construction and engineering industry. This is a new record for the industry. Turkey remains the most represented nationality within Central and Eastern Europe with 62 parties.

Another interesting development is that in 2018 the ICC International Centre for ADR received a total of 70 new cases registered under the Mediation Rules, Expert Rules, Dispute Board Rules and DOCDEX Rules. Of these, 37 new cases concerned requests for mediation services and 24 for services related to experts. As in arbitration demand from the construction sector was the highest and the largest demand came from Turkish parties as regards the expert services.

These two sets of information indeed, tell us something about the disputes concerning the construction industry and the Turkish contractors; while the ICC arbitration seems to remain as the main type of dispute resolution for Turkish contractors, alternative methods are also getting tried by the industry. Mediation for example, is a non-adjudicatory method of dispute resolution and a relatively new area for the Turkish international contractors.

Mediation is a means of alternative dispute resolution whereby an independent person (mediator) assists the parties to negotiate and resolve the dispute cost effectively and promptly. As such it is relatively informal, confidential and consensual i.e. resolution based on party interests rather than legal rights.  The participants should therefore have some training and experience.

Expert determination on the other is a process whereby the parties agree to refer the dispute to an independent third party who is an expert in the subject to give a binding decision on the dispute.

Please find below an article by our managing director published in Global Construction Review. In this article the developments in the Turkish Rail System has been summarised and the opportunities for the construction industry have been highlighted. Please CLICK HERE to read the article.

A section from the said article; 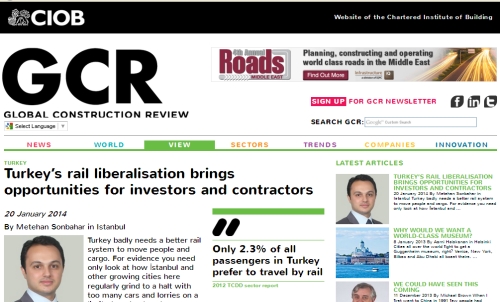 Our article published in the CIOB magazine.